Ray Snider is a student at Tower Prep, and is roommates with Don Finch, and initially Ian Archer. He is also friends with Zack Blonsky.

Ray Snider, along with his roommate Don Finch, and his friend, Zack Blonsky, are the first students that meets Ian Archer, when awakes at Tower Prep. He laughs at Ian's initial freak out, before actually telling him where he was. Ray also mentions, that it is nice to have a new roommate, ever since their former roommate Stephen Phillips made the forest run and disappeared. They then ditch Ian, leaving him a 'map' to new student orientation, and leave for first class. The map actually leads to the Buffer Arena, where he is hazed by the Buffer Teams. Later, they are outside the actual new student orientation building, laughing about Ian's mishap when he arrives. Later, after Ian comes back from class, Ray and Don are messing with his stuff, Don is looking through his phone, and Ray is listening to his iPod. Ian asks for it back, but Ray chooses to drop it, breaking it. This angers Ian who shoves Ray up against a wall. Ray attempts to goad Ian into punching him, but Ian sees that is what he wants, and leaves. ("New Kid")

While Ray, Don, and Zack, are in the showers that night, they see Ian steal their clothes and give chase trying to get their clothes back. They run out naked on the lawn but get trapped by the security beams. Ray is shocked when Ian appears suddenly out the window of their room, as he thought he just saw Ian run off the lawn. They are then busted by Math, and punished by Headmaster. ("New Kid")

Ray often uses the training room to hone his ability, using huge weights to train. He, along with Don, try to use the thefts that are occurring (the ones Ian is charged with) to try and hit on Ava Taylor and Lisa Merriman, by saying they were just checking to make sure the girl's stuff was safe. However, they are both rejected by the girls and forced to leave. On their way back to the room, Don is disillusioning himself into thinking the girls were into them, when they are stopped by Ian's Monitor, Chelsea Sloan. After proving that they really were who they said they were, they are allowed in. Ray and Don both go to movie night, but come back after the movie was apparently stolen. They blame Ian, who is already under the covers trying to sleep. Ray goes on to inform the disillusioned Don that he was blown off by Lisa at the movies, something Don doesn't seem to grasp. Hearing Ian laugh, Don attempts to rip the covers off the bed, while teasing him about liking CJ Ward. Ian responds by saying he doesn't like CJ, but actually likes Suki Sato. This gives the two boys pause, before Ray points out that Suki is pretty hot, which Don agrees to. Later Ian is able to switch rooms, which leads to Fenton Capwell becoming Don and Ray's new roommate, much to their dismay. ("Monitored")

Ray is revealed to be one of the current members of the Rooks when Ian and Gabe are tapped to become new members. ("Rooks")

When Ray discovers that Ian's preflex ability is gone during a game of Rush Ball, he takes the opportunity to pick a fight with him, but Coach breaks it up. In the hallway, they get into a fight, and Ray is able to punch Ian in the gut, sending him flying. However, Ray also becomes infected with Chemica Desin when he touches the campaign button Ian is wearing, which blocks his ability. When Ray punches the ground, he injures his hand, and has to be taken to the Nurse. ("Election")

Not Everything is as it Seems[edit | edit source]

He is likely to have a crush on Suki, which she may somewhat return. They seem to have good chemistry during their pairing as partners for the outdoor science scavenger hunt. He attempts to make a roar, which makes Suki laugh. When he asks her to do better, she uses her Mimicry to let out an animal roar. Ray continues to egg Suki on, which she happily agrees. This is allows for a moment between them, as they both laugh and smile at the sounds she makes. ("Field Trip")

Later on, as they continue to work on their assignment, Ray finds fungus, which Suki makes fun of him for. He then finds slime mold, which he then tastes, somewhat disgusting Suki. He gets annoyed by this, and comments on how he thinks that Suki is acting weird, as she is carrying a pedometer for apparently no reason. She then thinks he is about to take a picture of her, but instead is taking a photo of the poison ivy she is standing in. Ray then carries her all the way to Nurse, kindly using his ability, abnormal strength to help her. Ray tells Suki that he'll do the entire project for her, making Suki realize he is a nice person. Gabe, possibly acting out of jealousy, says he doesn't have a chance with her and to give it up. Ray answers that by hitting Gabe's sprained ankle. After the assignment is over, he joins forces with Emily Wright and Fenton to find out what Ian, Suki, CJ, and Gabe are trying to do. ("Field Trip")

When someone parachutes into Tower Prep and an alarm goes off, Fenton suggests that maybe Ian and his friends have attempted to escape. Ray worries about Suki and runs to her room to check up on her. He finds her there, safe and sound.("Snitch")

His ability is Hyper-Strength. His work out routine consists of him lifting large weights, he puts his fist through a wooden door effortlessly, and his punch sends Ian flying backwards. He also appears to be invulnerable (or at least has a high tolerance) to injury, as the other students were shocked when he hurt his hand after he was in contact with Chemica Desin. ("Election") When Ray takes Suki to Nurse after she is exposed to a patch of poison ivy, he carries her the whole way. Gabe asks why he was carrying her, he says that you can't be too careful, and then goes on to say "Besides, it's not like it's a problem for me anyway." ("Field Trip") 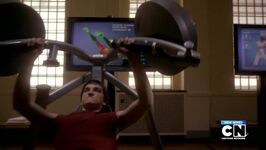 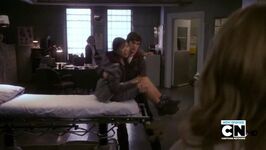 Laying Suki on the nurses bed 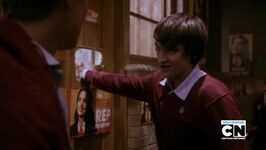 No problem punching thru doors
Add a photo to this gallery
Retrieved from "https://towerprep.fandom.com/wiki/Ray_Snider?oldid=11506"
Community content is available under CC-BY-SA unless otherwise noted.